Comics and graphic novel formats can be used to tell new stories, to retell old stories and to inform and instruct for example information reports, book reports, text analysis, character studies, diaries, and even instruction manuals.

Multimodal meaning resources to consider: images, print, design, dialogue. Specific comic features include framing of information within each frame; and organisation of  frames on the page, size, design and shape of frames. Visual resources also include use of call outs, dialogue balloons, lines, shapes, colour, angles and visual characterisation.

Look for graphic novels as original texts and retellings of familiar stories. The Cooperative Children’s Book Center (CCBC) (School of Education at the University of Wisconsin-Madison) offers extensive and detailed guides to graphic novels for different age levels.

Stick figure Hamlet by cartoonist Dan Carroll is an interesting example of a retelling. 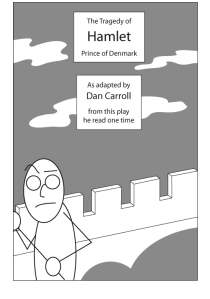 There are quite a few software programs and tablet apps for creating comics. Comic Life is a well resourced tool available for Mac and PC computers  and as an iPad app.

Comic Life in Education provides excellent resources for teaching students how to create meaning in comics.

Creating a Graphic Novel – Grade 8 Humanities is a useful teacher resource created by teachers Dave Scott and Jaime Groeller from the Calgary Science school. The web page includes a brief overview of the project and a complete example of student work, along with downloadable detailed notes, a PDF explanation of the project and all the steps and handouts used.

A video introduction to comics and Graphic novels as the 21st-century comic book is a four minute video segment from the ABC program ‘Behind the news’ which explores the history of comics with accompanying teachers notes and links to Australian Curriculum English. Suitable for Upper primary: Year 6; and Secondary: Years 7, 8, 9.

Scott McCloud is a highly regarded comic author who shares his expertise though his website and books, Understanding Comics (1993), a 215-page comic book about the comics medium and Making Comics (2006).

Petit Sammy éternue (Little Sammy Sneeze) is a old comic strip (1904) which very effectively plays with the concept of framing in comics.

A simple one page example of a Year six student’s first attempt at a comic strip. Use of different frame sizes is a significant feature here.